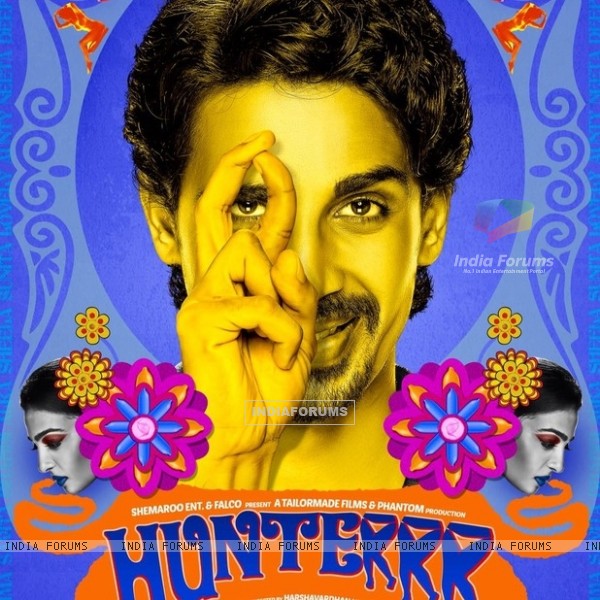 When one attains adolescence he often wonders or is rather inquisitive about the anatomy of the opposite gender. There are various ways one adopts to get to know about the practical aspects about it. Some resort to movies, magazines, or like the recent times suggest, the Internet. But what does a hyperactive guy of the 90s do? He obviously didn't have access to the Internet. Going for movies could be quite embarrassing. That is probably when they resort to vasugiri or in Harshvardhan Kulkarni's term, becomes a Hunterrr. This movie is a coming of age comedy which would be enjoyed by everyone, the ones who say no, trust me, are lying.

Hunterrr is a story about Mandar Ponkshe who is smitten by the opposite gender and tries every trick in the book to woo the woman he sets his eyes on. Even though he is not very attractive still has a 100% success ratio. When he finally begins to take life seriously the ghosts of his past begin to haunt him. Whether it is a problem for him or no is the main plot of the film.

Gulshan Devaiah is the main protagonist of the movie, Mandar. He does a commendable job in the role of a pervert. He has caught the Marathi accent in his English quite well. He doesn't look amazing on screen, neither does he look hot, in fact you could put him into the non-attractive category but there is something charming about him nonetheless. He does steal the show. There are hardly any short comings in his performance and is true to the title of the film. He might even remind you of some of the debauches you have come across in your life.

Radhika Apte plays the role of Mandar's fiance, Trupti, in the film. She does complete justice to her role. She comes to be a sweet simple girl in the film. Her chemistry also works well with Gulshan. She brings in the pleasant change in the course of the movie.

Another Marathi mulgi (girl) in the film is Sai Tamhankar who plays the role of Jyotsna in the film who is a house wife. Well her character could offend some people as she portrays the role of a housewife who satisfies her physical needs outside wedlock. The kind of infidelity she portrays may not go down well with certain sections of the society. Nonetheless she does well in the limited time she has in the film.

The music of the film is catchy and has a 90s disco feel to it. Thanks to Bappi Lahiri for that. The movie tends to stretch at places. The main point of the film is taken too far in the movie and eventually tends to become boring. Comic timings are great in the film. There is a very funny take on the Savita Bhabi series that had made news sometime back.

All in all the movie is a onetime watch and could be your dose of some cheap thrill. But it can be given a miss as well. Those of you would wait for it to come on the small screen, its no use as by the time the movie is edited for TV nothing much of it will remain.