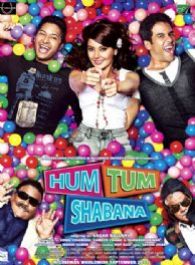 New Delhi, Sep 19 The team of 'Hum Tum Shabana' is off to visit the shrine of Hazrat Khwaja Moinuddin Chisti in Ajmer to seek blessings of the Sufi saint in the runup to the film's release.

'Leaving for Ajmer Sharif with 'Hum Tum Shabana' unit... Tusshar (Kapoor) will join from Khimsar, Minissha from Delhi, we all leaving with producers and Rafi (Kazi),' actor Satish Kaushik posted on Twitter.

The comedy, set for release Sep 30, is directed by Sagar Ballary of 'Bheja Fry' fame. Produced by Sunil Chainani, Sameer Chand and Subhash Dawar, it also features Shreyas Talpade, and marks the acting debut of model and ex-VJ Pia Trivedi.

Arjun thanks SRK for 'RA.One'

Actor Arjun Rampal is grateful to superstar Shah Rukh Khan for choosing him to play the villain's role in his dream project 'RA.One' slated for a Diwali release.

'The day I heard the script of the movie, I instantly wanted to do the film. Shah Rukh has worked for over three years on this dream project and I am very glad he considered me for the role of Ra.One!' Arjun told friend, actress Preity Zinta on her chat show 'Up, Close and Personal with PZ'.

The actor, who won a best supporting actor National award for his performance in 'Rock On!!', says he had to work hard for the superhero flick.

'We (Shah Rukh and I) would make up early morning and go running for miles up the hills and even in the lakes!'

Actress Lara Dutta, who is expecting her first child, is exasperated with the number of clothes that she owns.

'House looks like a warehouse!! I've FINALLY realised that I have way too many clothes than I can ever wear! Besides already giving away TONS!' Lara posted on micro-blogging site Twitter.

It seems that the excited mum-to-be is busy making space for her baby's clothes and toys.