View Profile
Reports are coming in. Hrithik Roshan has said no to Karan Johar for doing the re-make of Agneepath. Few days back the media was bedazzled with the news that KJo was remaking the legendary movie starring Amitabh Bachchan, Mithun Chakraborty and Danny Denzongpa in the original. There were speculations about the casting of the movie. Hrithik was considered for essaying 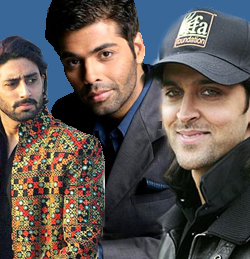 Featured Video
the role of Vijay Dinanath Chauhan, which was played by Amitabh Bachchan in the 1990 movie. But now, he has declined to do the role saying that he "was a tad apprehensive about stepping into Big B's shoes.", says our source. Seems like he has been able to even convince KJo so much so, that now KJo is having second thoughts too. Adding to the apprehension, Hrithik would be busy with another film at the time Karan plans to go on the floor with the New Agneepath which is in the beginning of 2010.

After winning awards for Jodha Akbar and eagerly waiting for his Kites to come on the big screens, Hrithik is pretty choosy in everything he does. Adding to this, he is writing the screenplay of the sequel of Krrish. Also, since the time he was adjudged the look-alike of Jesus, many film-makers are looking for a piece of him. Wow, Hrithik does seem like the Man of the Year! Isn't it?

Coming back... Who will then play Vijay Dinanath Chauhan in the re-make? Guess that's simple. Of course, the son of Vijay... Junior Vijay Dinanath Chauhan aka Junior Bachchan. Abhishek Bachchan has said in most of his interviews that his favorite film is Agneepath. Who would be, then, most happy to be in the film? AB Baby must be floating in the clouds now. His dream is going to be fulfilled very soon.

Would you like to see that? Can Jr. B be better than Big B or as good at least?? Thoughts, thanks and thwarts are being eagerly waited for.