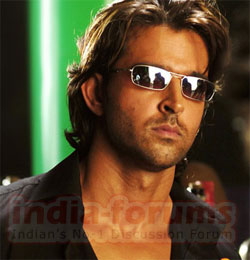 He has seen them all, whether it is the sexy seductress in Dhoom 2, or the Mughal beauty in Jodhaa Akbar! Yes, we are talking of the man who has managed to play all roles with ease, Hrithik Roshan!

After getting praised for his empowering role as the Emperor Akbar in Jodhaa Akbar, the ever-graceful Hrithik is all set to cross boundaries and work with the Uruguan model, Barbara Mori in his next film, 'Kites'.

"It's quite a journey from the Mughal era to Uruguay. But I suppose that's the advantage of being an actor. You can be transported anywhere you like", says the actor.

Kites will be produced by Rakesh Roshan and directed by Anurag Basu.