Mumbai, Aug 19 (IANS) Bollywood star Hrithik Roshan was so moved after meeting people affected with paraplegia while researching for his role in Sanjay Leela Bhansali's 'Guzaarish' that he has decided to help them in whatever way he can.

Hrithik is playing a paraplegic in 'Guzaarish' and met patients to be able to get under the skin of his character. While meetings the patients helped him understand his character better, it also left a deep impact on his mind.

'Hrithik is taking his role very seriously and has been reading a lot on paraplegia and watching videos to understand and study their mannerisms and behaviour. In fact, he even visited several people affected by the disease to get a first hand account of their experiences,' said a source close to the actor.

'The intensive study and frequent interactions with people suffering from the disorder have moved Hrithik to a great extent. He came across some young, talented people who were left incapacitated due to paraplegia and he immediately decided to do his bit to help them,' added the source.

Aishwarya Rai is playing female lead in the film. 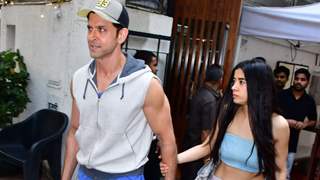