The tinsel town's lover boy, Shahid Kapoor has become the talk of the town these days. Definitely 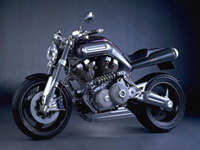 Featured Video
not for his break ups or link ups which infact escalated his female fan following but for his sports bike, Yamaha MT01.

Jr B even called up John Abraham who simply adores bikes. When John received the call from Abhishek, he was shooting a promo for his upcoming movie 'New York'. However, upon hearing this news immediately rushed down to have a look at the bike!

Now what can we say! Before it was link ups and breaks ups that made news but now, its bikes!