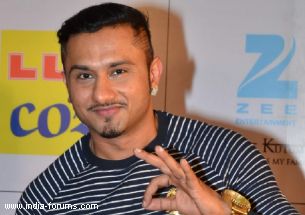 Rapper-composer Yo Yo Honey Singh, who is making his acting debut with the film "The Xpose", says he has a small negative role in the movie and that he has tried to copy legendary actor Pran in it.

"My role in this film is like a cameo, I am coming as a debutant actor. It's a very short role with only three to four scenes and it is a negative character," the 29-year-old said here at the Miss India 2014 contest.

Honey Singh says acting is the toughest of all performing arts.

"I think acting is the most difficult one among all the performing arts. Writing songs, making music and singing is important to me and I do all three," he said.

He wanted to have a brush with acting.

"You play someone you are not...So I wanted to learn it. Anant Mahadevan is a senior actor and filmmaker and Himesh (Reshammiya) asked me if I would do a small role and I said yes," Honey Singh said.

"The Xpose" stars composer-actor Himesh Reshammiya in the lead. It is a detective thriller, and besides some new faces, the film also stars Irrfan Khan.

The movie will hit theatres May 23.