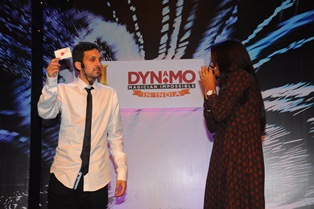 After astounding people and celebrities across the globe, internationally acclaimed magician, Dynamo, is currently touring India. As a part of this trip, HISTORY TV18, one of the leading factual entertainment channels in India, organized a special event for Dynamo to meet his fans in Mumbai on 21st March, 2014. The crowd, consisting of over 300 enthusiastic fans, was left spellbound by his magic and illusions.

Prior to dazzling Mumbai, Dynamo chose to stay true to his profession and love for all things magical with his decision to create his own miracles in the spiritual capital of India - Varanasi. Along the banks of the Ganges, he attempted to unravel some of the mystery of this holy city, while simultaneously adding to the intrigue and charm of this place.

Speaking on the occasion, Ms Sangeetha Aiyer, Vice President & Head - Marketing A+E Networks TV18, stated, "Ever since our launch, we have been pushing the envelope on unique content. Viewers love a chance to interact with their favourite global talent from these shows. Thus, their visit to India creates a lot of buzz like the Pawn Stars India Tour last year. We are humbled by the adulation and success of the Dynamo event and delighted by the excitement of our viewers to see him perform live."

Steven Frayne, better known as Dynamo, is one of the greatest illusionists of our times, effortlessly combining his amazing sleight-of-hand skills with mind-blowing magic.  The celebrated magician has been seen walking on the River Thames, turning lottery tickets into money in the presence of Robbie Williams, and levitating in front of James Corden and live studio audiences.

Urvashi Rautela’s ancestral history revealed; get a sneak-peak into ...

nish0910 9 years ago thanks! :D
good luck for your future ahead :D
I hope he is successful! :D
she is really well deserving!

..Armaania.. 9 years ago Thanks for the article.
And wish tushar best of luck.
He did an amazing job in Golmaal.Infact , he wouldn't be there , Golmaal wont be that entertaining.

SophiaQ 9 years ago If I were Tusshar, I would find another line of work. He's not heading anywhere in Bollywood.

shamil 9 years ago @coolgirl09- that may be his/her way of thanking the writer for the article. I don't think any of us have the right to tell others 'not to comment' ( even if it is the same sentence every time.)

Kangana Shares Video of Anurag Confessing To Have 'Abused a ...
24 minutes ago