Is it true that you are composing for a Telugu film?
Yes. We could not say no when a good friend of mine approached us with this offer to compose music for a Telugu film called Chintakayale Ravi. Venkatesh is playing the lead in the film. It is a very intense story. We are one of the few music directors who insist on a bound script even before we start working on any project as music directors. We have always gone by the story whether it is a Hindi film or for that matter a Malayalam film.

You call yourself a rock and roll sing-a-song writer. Why? 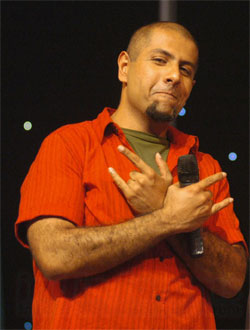 You claim never to have gone to any producer for work...
Yes. You can say that Pyar Mein Kabhi Kabhi was our first assignment as music directors. Earlier we were busy composing jingles for ad films. It is true that till date we have not gone to any producer asking for work. Whatever work we have done has come on our way on a platter. We are fortunate that we are getting good work.

Tell us about competition in the field of music.
There was this edge of unhealthy competition way back in the 80's, not now.We feel that the more the better music directors, the better it will prove to be for the music industry. We admire Shankar-Ehsan and Loy as well as A. R. Rahman and Preetam a lot but we do not idolize them. At the end of the day, you can name only four top music directors though there are so many in this industry. We are thankful to God that we figure among the top four music directors. We take up work because we enjoy doing what we do and hence it shows in the end product. We do not take our work flippantly or lightly.

What do you think about Himesh Reshammiya as a music director?
Himesh is a sharp businessman. All I can say is that he has great love for the business.

How do you function as a team and handle each other's egos?
We ensure that we do not get stuck in a rut. We function well because we are very brutal with one another. Believe us; it works a lot if you are each other's staunch critic.

Why did you do a blink a minute and you are out scene in Om Shanti Om?
Let me assure you that it was my first and last attempt at acting. I promise you that I will never again do the same mistake. I could not refuse both Farah and Shah Rukh Khan when I was asked to do a special appearance. Farah was frank enough to tell me after watching the trial that I was very bad as an actor in the film. If at all, people remember me in the film; it is only because of my size. Size dose matter in Bollywood.

You mean to say that even if some one tempts you with a good offer, you will not act again in any film?
It would be definitely a horror film if I am picturised in it as an actor. May be I will pass on the offer to Shekhar since not only is he younger than me but also looks like hero material. What say?

What is your take on plagiarism?
You do not need to resort to plagiarism when God gives you songs literally on a platter. We have a long tradition of lilting songs. We are ready to sue and put money where our mouth is if someone proves that we have plagiarized such and such song. It breaks our hearts when we find a favorite song of ours is stolen. -Jyothi Venkatesh