Success seems to get to the head of TV actors quite quickly. Take Hina Khan (Akshara) of Star Plus and Rajan Shahi's Yeh Rishta Kya Kehlata Hai for e.g., for this Kashmiri girl from Delhi is apparently giving a lot of grief to STAR Plus officials when they ask her to speak to outstation media during lunch hour. 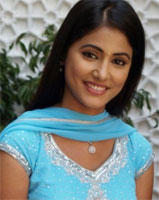 Featured Video
According to our source, "She always tries to wriggle out of such calls by speaking to imaginary people who apparently enter her make up room. A visibly upset STAR then even gave her a dressing down, making it clear to her that she needs to give due attention to the media. They even told her that she better understand how the TV world operates i.e. that she is famous only till her show (Yeh Rishta Kya Kehlata Hai) is running, and once it's over she will not even be remembered".

Our source from the channel also states that, "If she speaks for 20 minutes to the media, it does not eat into her off time, for then the lunch hour is extended".

It is heard that a smart Hina flatly denied all the above allegations and tried to act sugary sweet when STAR confronted her.

Besides Hina, even Sara Khan and Parul  Chuahan (Bidaai) have apparently grown too big for their boots. The former is throwing big time tantrums ever since she joined Dance Premier League as host. She tells all and sundry that Arshad Warsi (one of the judges in the show) likes her dancing and has even recommended her for some film projects. Parul on her part had also developed starry airs during her Jhalak 3 stint.

Disclaimer: The views expressed in this article is purely based on the views of the source, and India-Forums.com does not comply with the same.

13 years ago no need 2 give us link we visit kis desh forum always n its true fun..those fans r nt like u guys.just shut up u all are very irritating n nt ready 2 accept truth so we shud ignore u..why 2 waste our time on ur silly n useless thinking

13 years ago i think u shud bring ur mind on da right track before advicing others...there is no need 4 any other fool when there r already dumbs like bidai n yrkkh cast in television industry.additi is new in da industry and has achieved much more than them bt wat can we do wen u cant see others success.dnt worry soon u'll fall down 2 earth wen sp will stop favouritism.Well u r rite bidaai n yeh rishta can never b compared 2 kis desh as its nt at all capable of....something best can never b compared wid something worst,u better understand dis

+ 5
13 years ago I wudnt b suprised if this is true as it happens to every individual when you finally get a 'stint' of success, its how you handle it that matters!

leharmasti 13 years ago feel lyk laughin after readin al comments... the aricle is abt attitude of 3gals... n its fact.. success entered der head.... i donno y u talk abt kis dis... (i dont lyk aditi too) god knows y both serials r doin gud wen der is nothin in it(wel m not sure if its really doin wel ).. actin of these 3 or story nothin is gud.. actually SP is worst...

+ 2
13 years ago @aadaa :- very nasty comments which reflects your upbringing.. if bidaai goes off air, it won't affect parul as you think, she is well established in this industry.. and know how to take care of herself ..

13 years ago is bidai still getting lots of trps ?i have doubts abt that show still doin well

13 years ago @ farislove >> yes dear :) i do understand simple english :P unlike u who cant even read properly unless some1 writes it in BOLD letters ...lolz..

+ 2
13 years ago how this report is given excellent with stars, when it is poor... excellent articles will not make the fans fight.. it is very very poor indeed.. who ever is rating please use brains..

@ farislove>>>
hello !! fact's arashad warsi's n extra/comedian who plays frnd of a hero in films :0 if u dont kno already ;p
frm dat position he cant "really" offer her nething :) i mean he's not a producer/director/big lead hero.... may b he jus said it 2 make her feel good not coz she's some xtra-ordinary/full of talent ^_^...but she really took it seriously :(
if u dont believe in this article den y comment :O ?? & if u think dat it's a false article den y do u believe dat he offered her nething a/w & he knows talent :0 ??