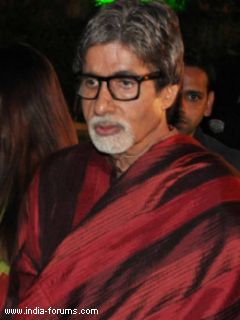 'KBC was fun though I am sure very tiring for Mr.B...hats off to him...(sic)' Shah Rukh posted on Twitter.

Shah Rukh, who is busy promoting his film 'Ra.One' these days, shot for the show in Mumbai Friday.

His superhero film is releasing this Diwali, Oct 26.

'Have to share this great news. I have been chosen for this year's Kalidas Samman (award) in the field of theatre. #KucchBhiHoSaktaHai (sic),' Anupam posted on micro-blogging site Twitter.

The 56-year-old, who has spent nearly three decades in the film industry, has featured in over 300 films so far. An alumnus and former chairperson of the National School of Drama, he also runs an acting academy.

Bipasha in love with Mykonos

Actress Bipasha Basu, who is in Greece for a film shoot, says she had a blast in an island named Mykonos. She loved its relaxed feel, food and shopping.

She couldn't stop raving about the place.

'...And how can I forget the sea food and the yummiest cheese crepes! Shopping here is also very my style - maxis and cute dresses in floral prints or whites and beads and all kinds of beautiful bracelets!' she added.