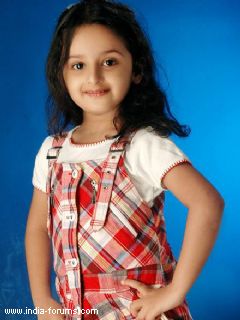 Television's cute and talented kid Harshita Ojha who has won audiences' hearts with her acting skills in Beyond Dreams' popular show Veera on Star Plus has now taken a step forward after Veera. The little one will be seen on the big screen as she has bagged a Telugu movie.

Our source says, "Harshita has bagged a Telugu movie named Yamaleela 2 which is a sequel of the 1994's super hit movie Yamaleela, directed by the ace director of Telugu cinema S.V. Krishna Reddy. Harshita will be seen playing the character of a little girl who aspires to be a singer."

When contacted Harshita, she told us, "I am excited about this movie and I will be going to Hyderabad next week to start shooting for the movie. They will teach me to speak in Telugu for this movie."

Way to go Harshita, TellyBuzz wishes you all the best for your movie!

prem_diwani 6 years ago wonderful bundle of talent and adaptable too... Best wishes to a real cutie

shanthi510 6 years ago Cutie!!Eagerly waiting to see you on tollywood screen!

silvermoonlight 6 years ago She is just too cute!!! and also has a knack for acting

warg 6 years ago Happy for ur sweetie... u were rocking as Veera.
Keep smiling...god bless

KiranSonu1 6 years ago Gr8 news...
All d best & G ood Luck Harshita Ojha for ur Telugu movie..U will sure rock it.

K.S. 6 years ago wow..she is coming to our city..want to hear telugu from her sweet voice.definitely i will watch da movie..ALL THE BEST

rnvdbhavani 6 years ago sounds great... i love dis girls dialogue delivery n acting... im waiting to watch dis mve now... last yamleela wass an exciting one to watch n its been one of d biggest hits... children r mostly attracted to dat mve.. it had one robot dat made dat mve highlight... so dis girl wil learn telugu too how sweet... love u so much... n all d best...

chweetu 6 years ago wow harshita's movie in telugu :D looking forward to it