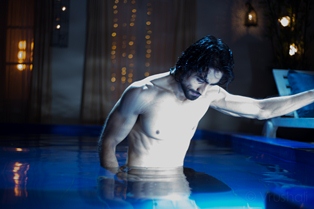 With his chocolate boy image, Harshad Chopra has made many girls go weak in the knees. However, in his new show Humsafars on Sony Entertainment Television, Harshad is seen in a completely different avatar. He is brooding and suave with an intimidating personality. This new look has resulted in his female fan following grow like never before, making him the new television heartthrob.

Giving his fans a further treat, Harshad will be seen shirtless in the upcoming episodes of the show. The track will see Arzoo (Shivya Pathania) coming to Sahir's (Harshad Chopra) house looking for someone but enters Sahir's room by mistake where he is relaxing in his pool. Mistaking Arzoo for his assistant Joe, Sahir asks her to give him the towel.

fantail 6 years ago You're doing awesome as Sahir...

6 years ago you are amazing as Sahir...keep rocking...

Parthaa 6 years ago You are the best actor... Love you Harshad Chopra

-soniya- 6 years ago Harshad Chopra,
You are one of the most powerful actors around...wish you all the best!!

6 years ago Love you Harshad Chopra...

aminaz 6 years ago I love you Harshad Chopra...

-deepi- 6 years ago Harshad Chopra...you are an amazing actor...love you as Sahir!!!

You are so hottt