Star Plus' shoot for Azaadi Live saw many instances, disturbing as well as happy, of the freedom enjoyed by Indians. Harshad Chopra the protagonist of Star Plus' Tere Liye experienced one such feeling that left him teary eyed at the end of his performance. 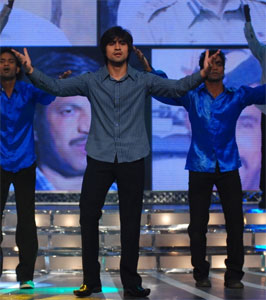 We hear that Harshad performed on the patriotic song from Rang De Basanti with great valor and intensity. He portrayed the vulnerability of the common man to the dubious and horrific acts like terrorism. His performance was applauded a lot by the audience present, and all were emotionally touched.

Talking about his performance, Harshad Chopra told TellyBuzz, "It was a great experience performing for the Azaadi Live event. I portrayed a common man who has a lot of grievances. The whole concept of the act was filled with mixed emotion; the guy is happy to be an Indian but at the same time, is unhappy to always live a life full of threat".

Speaking about his emotional moment on stage, Harshad said "As I performed, I could feel the pain and terror that our citizens are living under. I am also a common man who lives with the same kind of fear, and I guess that is what made me emotional at the end of the act".

Harshad feels that as humans, we need to awaken at the right time. "Even if we cannot help the whole world, we can at least be of some help to the human beings around us", says he.

Don't miss Azaadi Live 15th August, at 12 noon only on Star Plus…

Your answers gives a glimpse of your plain nature !!! Love you!!!

10 years ago i wish the choreography and editing were good

10 years ago love u harshad,god bless you.