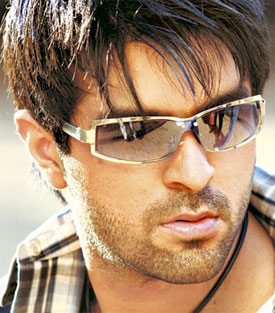 Harman Baweja, better known as the boyfriend to Priyanka Chopra, starts his filmy career with Love Story 2050. Special features of the budding star make him having some resemblance with the famed name Hrithik Roshan, but his dancing steps in the promo of the film help people find another similarity between them.

On the eve of the audio release of Love Story 2050, Harman snapped to the issue of semblance between him and Hrithik. “If I look like Hrithik then more than me my parents are responsible for that. Believe me, if I could have chance then would have traveled in a time machine to change everything,” helplessly explains Harman.

However, it’s not new in Bollywood to have similarity of faces. While Madhuri Dixit has similarity with golden age actress Madhubala, Shah Rukh Khan was mostly known as the look alike of Dilip Kumar. But they both proved and created their own identity with their prowess in acting.

For the time being the same pressure of creating own identity has come to Harman who has to create his own space where only his name will be tagged well. We guess Harman can do that very well. Isn’t it!