The second son of a family undeniably tied to Bollywood, Arbaaz Khan first made his debu 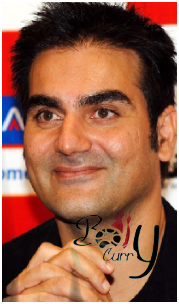 t in 1996 with Daraar, a movie in which he scooped up the Filmfare Best Villain Award for his performance as a psychotic wife-beater.

However it's his presence in successful multi-starrer films, such as Pyar Kiya To Darna Kya, Garv: Pride and Honour and Hulchul, that have cemented his career. In 2010, Arbaaz gained on to claim more fame as he switched hats to producer with Dabangg. Starring brother Salman Khan and newcomer Sonakshi Sinha, the film released as a huge hit and landed the coveted spot of the second highest grossing Bollywood film of all time!

Whilst last year was marked with Salman throwing a birthday bash for his brother - with celebrities such as Jacqueline Fernandez, Sajid Khan, Ameesha Patel and Ritesh Deshmukh making an apperance - so far the actor/producer has not revealed any details on how he plans to spend his birthday this year.

Currently, Arbaaz is busy with pre-production work of the Dabangg sequel and has just wrapped up Do Aur Do Paanch which will release later on in the year.