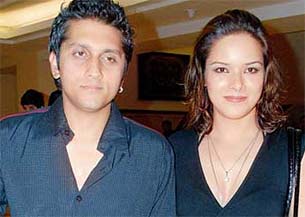 Its celebration time for filmmaker Mohit Suri and his wife Udita Goswami, who completed one year of togetherness, Wednesday.

The director took to Twitter to convey his feelings to his actress-wife.

The filmmaker, who is busy with his upcoming film "The Villain", is said to have whisked his wife away to Thailand for a much awaited holiday.