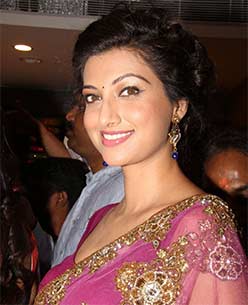 Actress Hamsa Nandini, who plays warrior princess Madanika in upcoming Telugu period-drama "Rudhramadevi", says filmmaker Gunasekhar was so impressed with her looks and elegance that he offered her the role.

"When I was called by Gunasekhar for audition, I was told that he had already auditioned nearly 100 girls to play Madanika. When he finalised me for the role, I was curious and asked him what he liked in me. He said I had the grace that he wanted for the character," Hamsa told IANS.

"He said there's a thin line that divides grace and sensuality. He felt I could bring that through my character," she said.

The film involves a lot of stunts and Hamsa enjoyed performing them.

"This is the first time I'm part of a film with a scope for action. I admit training in horse riding and archery is physically gruelling, but seeing yourself on screen performing action is fun. I enjoyed performing stunts for a change," she said.