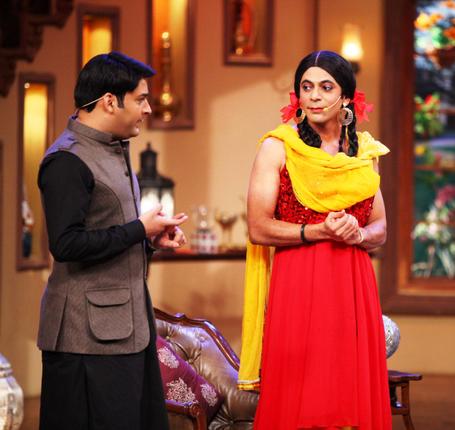 K9 Productions much loved show Comedy Nights with Kapil on Colors has been loved by the masses for its humorous gags and performances of the artists. While the essence of the show is pure comedy, it also entertains the viewers through celebrities who make their presence on this popular show.

The show's host Kapil Sharma's witty and fun loving behavior is loved by the audience a lot. Though the show is run by Kapil Sharma however the central characters are Palak and Gutthi.

Their typical way of dressing, language and poetic way of interacting with the guests is to  watch out for. However, fans missed Gutthi as he left the show but even after that Palak played by Kiku Sharda was praised for his acting skills.

Sunil who was last seen in Star Plus' Mad In India as Chutki, is all set get back to his home which is Comedy Nights with Kapil.

According to our sources, "Sunil is set to return to Kapil's show. Kapil wished Sunil luck when he decided to break away. Now, he is happy to have him back."

The fun quotient will be back in the show with Gutthi's entry. His way of introducing himself was very unique and that has become the patent way of Gutthi now. Viewers will be very happy and would tighten their seat belts for the laughter ride after Gutthi's entry in the show.

When messaged Sunil to confirm the news, he reverted back and said, "Let's talk about it after few days."

We're sure Kapil would be happy to have him back. Not to forget even the fans they would be the happiest. What is yet to be seen is whether Sunil will return as Gutthi on show or with a different character altogether.

Once is a bitch, remains always.

Kapil don't do this mistake.

vjethmalani 6 years ago The return of Sunil Grover on "Comedy Nights With Kapil" will bring more Laughs and fun on the already hit Show. Sunil was an integral part of the Show and the audience will love to have him back.
Vinod Jethmalani

shubhika124 6 years ago Much Glad

Guthi was one of the best thing about the show... really missed you Guthi

Piggies 6 years ago Finally Sunil Grover realized that he can't run a show with out the King of Comedy Kapil Sharma. Gutthi needs Kapil not the other way around. Kuch aur kaam nahi mila toh wapis agaya CNWK pe. Kapil is such a talented comedian and no one can beat him!

kooltoad 6 years ago if Sunil comes back it will be good for him and the show... wish he had never left.. guthi was one of the most loved original characters of the show with her unique style and commendable performance...

_Anusha_ 6 years ago sunil left the show on his own wish na?
wh y does he needs kapil now? &gt;_&lt;
has he realised he's nothing without kapil?
kapil is the KING and KING MAKER for sunil!
sunil knows a talent and kapil knows to mould his art is the right direction.
we want an apology from sunil!