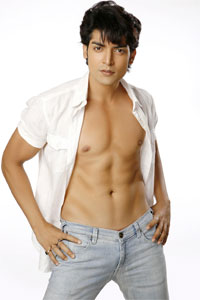 Gurmeet Choudhary who plays the brooding, ruggedly handsome Maan Singh in Star One's Geet Hui Sabse Parayi, is so passionate for his acting that he didn't mind getting his tongue scalded for a good shot.

According to our source, "There's a shot where Geet (Drashti Dhami) challenges Maan (Gurmeet Choudhary)…indirectly to eat chillies. Maan's ego gets hurt big time and he sits to prove that he can definitely eat more chillies than her. The catch is, Gurmeet did the stunt all by himself and ended up with a severely stinging tongue."

So is everything fine with Gurmeet? "Yes it is," Gurmeet assures us with a chuckle. "There was no other option to get the scene right and I just gorged on the chillies without thinking much about it. The hell happened once the director said 'cut'. My tongue was on fire. For half an hour I couldn't regain my normalcy. I cannot explain to you in words…," the actor trails off.

Apparently, he got Debina a little too concerned with his overzealous approach to acting. "Debina knows that at home I may laze around, not at all bothered about the chores. But when it comes to acting, she knows that I go all the way. However, after this incident she did get a bit apprehensive and told me – Whatever you do, please think over and then take the decision."

Gurmeet performed the act inspite of being unwell. "We had been having night shoots continuously for a few days and my body is just reacting to the stress. But I know that I'm working in a daily soap and every second, every little gesture matters. So I did the stunt and I'm glad it looks absolutely realistic," signs off Gurmeet.

7 years ago Drashti Dhami every week You are looking amazing in jdj and your beauty is glowing there!!!

7 years ago Drashti Dhami luving u so much princess hope u enjoyed sunday fully this new week gives lots of happiness to u and ur show and hope that ur show got very high trps god bless u angel all d very best for JD and waiting for 1st june and to see u in dance floor...

+ 2
7 years ago Love u Drashti Dhami
You are princess of Maan!!!!
Always Love u MAANEET!!!

+ 2
7 years ago Drashti Dhami, good morning, have a great holiday dear as you need to have some relaxation!!!!