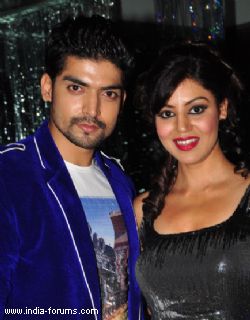 What better way to celebrate your victory in a dance reality show than through dancing away merrily? Indeed that is exactly what Gurmeet Choudhary and Debina Bonnerjee Choudhary did to celebrate Gurmeet's victory in Color's Jhalak Dikhhla Jaa 5 - Dancing with the stars.

As some of the guests were not in India before, the couple delayed the success party for a while. The invitees included- the Jhalak Dikhhla Jaa Season 5 creative team, its choreographers and participants, current and former colleagues of the couple and their close friends.

The party started at 9am and went into the wee hours of 4am in the morning.  It was a disco themed party of the 80's and 90's at the Golden Leaf. There was so much of shimmer that the guests wore goggles. Among the guests were seen Kratika Sengar, Vije Bhatia, Shashi and Sumeet Mittal, Rahul and Dimpy Ganguly Mahajan, Ankita Lokhande and Sushant Singh Rajput, Esha Sherwani, choreographer Salman Khan, Karan Wahi, Leena Jumani, Vindoo Dara Singh and his wife Dina Umarova, Shilpa and Apurva Agnihotri, Karanvir Bohra and wife Teejay Sidhu , Sumona Chakravarti, Vivian Dsena and wife Vahbiz, Jay Bhanushali and Mahhi Vij, Ragini Khanna,  Rashmi Desai Sandhu, Nandish Sandhu,  Rithvik Dhanjani, Moonmoon Dutta etc.

Thankfully Gurmeet didn't have shooting the day after the party. Keep watching this space on more updates on your favourite actors Gurmeet and Debina. 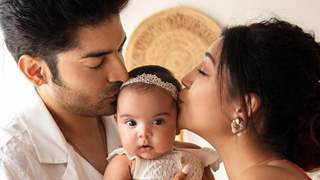 kkkkr 9 years ago You should have call Drashti Dhami because without your sparkling chemistry with her you won't reach there as people know because of Maan singh khurana...debina should understand this instead of being jealous...

9 years ago god bless you gurmeet. love you as ram yash and maan.

9 years ago Gurmeet you are the best. wishing you all the luck

+ 3
9 years ago Gurmeet you are the best. wishing you all the luck

9 years ago U r such swtheart gc. U alws bring happiness 2 our lives so i also pray 4 ur happiness nd success in ur life what u really deservs. Love u my Ram Maan nd Yashu.

+ 3
9 years ago Love u Ragini Khanna...Thanks Jhalak for givin us GurIni &lt;3

Its Becoz of JDJ that Ragz-Gc are frnds