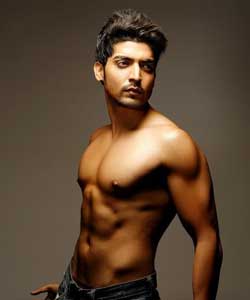 Gurmeet Choudhary, aka the angry young man Maan Singh Khurana of Star One's Geet Hui Sabse Parayi, enthralled the audience with his good looks, captivating eyes and heart pounding stunts. But did you guys know that he used to give ideas for his own stunts and sometimes choreograph it by himself?

Yes, you heard it right.

To know more about his talents, TellyBuzz contacted Gurmeet Choudhuray and he said, "Yes, I do my own stunts in the show. Since I am trained in Martial Arts and Gymnastics, whenever there is a stunt scene I try to inculcate my inputs into that. I believe in giving what I have learnt. "

He adds, "There are so many things that are yet to come out from me through the show, but I will reveal it step by step as and when the show demands."

When asked about the most difficult stunt that he has performed in the show, he said, "There was a recent fight sequence that I did with a wrestler wherein I had to give live demonstrations several times for different takes. That was one of the toughest scenes that I did."

Seems like the actor has taken his role really seriously. Way to go Gurmeet!!!

GCISBEST 9 years ago GURMEET U R THE BEST...ADMIRE U FOR THE HUMBLE HUMAN BEING U R & AN EXCEPTIONAL ACTOR WITH MESMERIZING EYES & SMILE

MSK.Rules 9 years ago GURMEET You ROCK and RULE as MAAN SINGH KHURANA. Love U Loads & hope to always see U Rule the screen

-nupur- 9 years ago Gurmeet Choudhary the most handsome and talented actor on TV.Love U loads

-nupur- 9 years ago Loved watching you perform at EKLKBK it was mid blowing the stunts you did.

sumona28 9 years ago Gurmeet choudhary the most handsome and talented actor on TV, .Gurmeet, you are a complete Actor, multi-talented.
And that is what makes you different from others in the industry...you rock my world
love you a lot
keep rocking

sumona28 9 years ago Goodmorning Gurmeet. You are the best . love you so much Take care...waiting for todays episode...