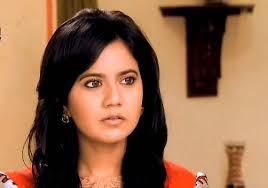 Zee TV's show Sapne Suhane Ladakpan Ke is all set to bring forth an exciting track for its viewers as Gunjan will reveal Baba's real face in its upcoming episode.

As per the ongoing sequence almost everyone from Baneras has completely fallen prey into the trap laid by baba and Gunjan  (Roopal Tyagi) is quite eager to know the truth about baba, she wants to reveal baba's truth in public.

The audiences have seen in the last episodes that Gunjan was asked to walk bare foot on the burning coal to be accepted as Guruji's devotee. Gunjan decides to do so in spite of Seema and Mayank (Ankit Gera) forcing her not to do so, but no one is aware that of trick Gunjan has used to reduce pain. Guruji accepts her as his close devotee and this paves her way to expose Guruji.

Our reliable sources say, "Gunjan will become Devi as Guruji tells her to do so, she comes in her Devi's avatar in front of the entire crowd of Baneras. Every one will feel that real goddess has emerged they are shocked to see her and start offering prayers. Meanwhile Gunjan reveals her identity that she is not any goddess and the baba is fooling all the devotees."

Will Gunjan be successful to reveal the real face of Baba?

Till then keep reading this space to know about more updates.

marty999 6 years ago Roopal Tyagi you will teach that guru a lesson as Gunjan you are too good.

milla 6 years ago Roopal Tyagi you are amazing as ever. I am waiting for a good Mayan track with lots of romance lol.

PROTIM21 6 years ago Roopal Tyagi, you are awesome. Waiting for a new mayan track..

milla 6 years ago I can't wait to see baba go down u will rock Roopal Tyagi.

Theta14 6 years ago @cuteangelasya:i like gunjan
she is one of the strongest lead in tv industry..

marty999 6 years ago Yes guru is going down go get him Gunjan. Roopal Tyagi and Ankit Gera are so cute as Mayan. SSLK Rocks

Theta14 6 years ago finally the track is going to end...

it's really a irritating track

all the best gunjan