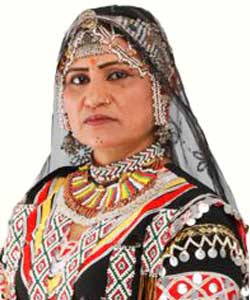 Colors' most dramatic and controversial show Bigg Boss Season 5 has started its series of fights and strategies with an equal amount of unexpected twists and turns.

As the third week comes to a close, we grab some juicy tit-bits about the second elimination that takes place tonight.

A reliable source states, "This week the show will apparently see the exit of Gulabi Sapera popular known as Gulabo. She is the famous Kalbelia dancer from Rajasthan."

After the dramatic scene created by Pooja, all the inmates wanted her to be eliminated, but we hear that the decision came as an unexpected blow to everyone.

We also hear that on the day of the elimination, Sonika Kaliraman, the ex contestant who voluntarily exited because of her pregnancy will share the stage with Sanjay Dutt.

With new people entering and old inmates leaving their throne behind, this house promises to offer a lot to it viewers...

shivani003 8 years ago Lol Sonika didnt "voluntarily exit"!!!! She did so cos BB told her to. Otherwise it looks like she came to the show in the greed of fame n fortune, ignoring the harm it would do on her child.

Also, Iam sure it comes as no shock that Gulabo got eliminated. She was boring.

Ms.S.K. 8 years ago People who are not well known are being eliminated. Why??? Voters only want the celebrities they know, can't be bothered to understand the outsiders. We say show is fake, yes it is but not 100%, voters are to blame also

zaara22 8 years ago this is just a fake show.puja mishra never gonna be out.becoz BB want like this.bt this is 1st tym i saw in BB dat BB support some1 who is totally devil in the show.
plzz BB dont do this..otherwise u might losses ur audience.plzz stop supportin puja..we r not blind.plzz

craziekudi 8 years ago POM will not eb eliminated soon as she is bringing TRPS...

sonu75 8 years ago i knew it from the first day
how can pooja mishra b eliminated so soon,,,pooja mishra is rakhi,,,raja ch,,dolly bindra of this season so she will remain in for many wks until another such thing will appear
poor mahek is also trying hard to gain some footage but truley this yr the only name that will get fame from big boss will b of POOJA MISHRA...

-Preeti- 8 years ago I agree ...PM is Dolly Bindra in the making ...actually Amar too is a tough competition to her. He does provoke ppl just like Dolly did.

sorina 8 years ago lol expected...if POM is there tht means more fights..more drama..more TRPs..soo how can she be eliminated so soon