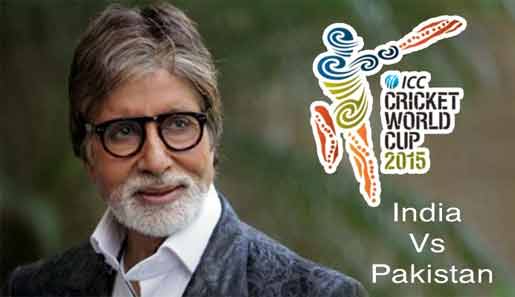 Megastar Amitabh Bachchan, who gave live commentary during the India and Pakistan match Sunday at the ongoing ICC Cricket World Cup 2015, feels that no emotion and feeling can beat the joy of wrapping the National Flag over the shoulders.

"Such a great joy when you drape the National Flag over your shoulders, wrapped around in patriotic fervour, delighted that one can share that moment with the Sunday well wishers, it is the ultimate emotion," the 72-year-old posted on his blog srbachchan.tumblr.com while.

He also shared a photograph of himself greeting several of his fans who gather outside his house here to see a glimpse of the megastar.

"Something stirs you on when it's a matter of country and our team...that effect and feel of being a part of your great country is beyond comprehension...it works for all nations, and each nation feels a sense of pride and value every time the anthem is played...sometimes that moment before a game, any game, is the most poignant and inspiring moment... the game comes after...way after," he added.

Big B was a commentator at the Indo-Pak match as part of an integration between broadcaster Star Sports and the makers of his latest film "Shamitabh", which released Feb 6.

Amitabh took to the microphone with some of the former cricketing legends after India won the toss and decided to bat.

He was delighted with the honour.

"Commentating for the India v Pakistan World Cup 2015 at the Star Studios...an honour one can only imagine and hope for...the cricketing legends of the likes of Kapil Dev, Rahul Dravid, Shoaib Akhtar by your side.

"Their keen interest in making sure I get it all proper and right...seasoned Arun Lal and other commentators lending a helping hand...and then sitting back after a while to see India victorious in a most decisive win...what a Sunday," he said.