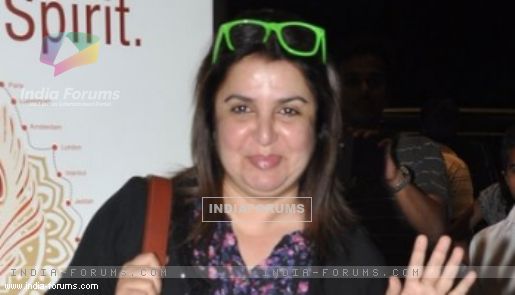 Farah Khan has choreographed song sequences with a bevy of Bollywood stars in her over two-decade-long career. But she says her favourite dancer amongst them all is comedy king Govinda for his sheer ability to dance with all his heart.

"Govinda is my favourite dancer. I feel very happy when he dances," Farah said here Thursday at a press conference for the official announcement of new dance reality show "Dil Se Naachein Indiawaale".

The Zee TV show, which will be aired starting Oct 11, is being launched in conjunction with Farah's forthcoming directorial "Happy New Year".

While talking about the show's concept, the choreographer-director spoke about the element that impresses her most when she judges dance shows.

In the past, Farah has been associated with dance-based TV entertainers like "Nach Baliye", "Dance India Dance" and "Just Dance". But what makes "Dil Se Naachein..." different is that the "Happy New Year" team will look out for dancers who may not have the technique or training, but those who feel happy dancing and make others happy with their dancing.

Farah said: "Dance comes 'dil se'. Steps come from the mind. I believe dance should come from the soul. I've judged dance shows earlier and I know I've had to give points to the technical aspects, but my favourite ones are always those who dance with their heart."

"Dance has to give the dancer and the viewer happiness. I've never seen a sad dancer," she added.

Her new offering "Happy New Year" also has an angle of non-dancers, who dance to make others happy -- while there's a heist angle to the story. The movie stars Shah Rukh Khan, Deepika Padukone, Abhishek Bachchan, Sonu Sood, Boman Irani and Vivaan Shah, who will feature as 'Agents of Happiness" on "Dil Se Naachein..." to judge talent in four cities - Delhi, Mumbai, Indore and Ahmedabad.