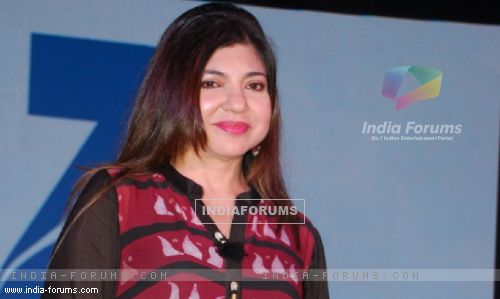 As the talent based singing show Sa Re Ga Ma Pa, on Zee TV has kick started its first episode, the Mahaguru Alka Yagnik who is judging this new season is quite excited to be back on the panel. While earlier also Alka was associated with Sa Re Ga Ma Pa little champs, this time she is back after a long gap and looking forward to nurture the skills of these little kids.

Telling us about her association Alka says, "I have been associated with Zee TV and Sa Re Ga Ma Pa since the first season and I'm glad to be back. The kind of talent that we get to see on this show is extraordinary."

So how does it feel coming back to the stage of Sa Re Ga Ma Pa? She says, â€œI was offered Sa Re Ga Ma Pa Seniors before but I turned down the offer because I wanted to do only Lilâ€™ Champs. The positivity of children and the energy is just commendable and adorable. The immense ability of the children is what I love to be surrounded with. I would also say that some of the happiest moment of my life is being in Sa Re Ga Ma Pa as a Maha Guru and a judge. On this stage of Sa Re Ga Ma Pa we donâ€™t judge children but help them to nourish and polish their talent which is what I like the most."

Speaking about the differences and changes that have been added in this season, she says, "From being proficient in different styles of singing to conducting and adapting children in different environments, this show has always been a learning ground for all and in this season as well the immense talent of the children is what the audience will be witnessing. The only difference in this season is I am pointing out the mistakes of captains Shaan and Monali Thakur but not the children."

We asked Alka Yagnik about what will be the points on which she will be judging these champs, she says, "It is very difficult as of now to judge anyone as everybody are singing well but after a few episodes they will become stronger and grasp the skill well and present themselves in front of the audience."

So will she be focusing more on the presentation and performance and she says, "Firstly it is their singing talent that will be judged as the show is all about singing but yes along with it we are helping the children as how to conduct themselves on the stage because appearance is also important at the same time. So presentation has to be good which is always an icing on the cake."