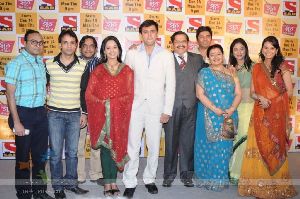 Shoots are just a reason, and the cast of SAB TV's Sajan Re Jhoot Mat Bolo is having a gala time in Goa. The story line will see some changes in the coming episodes, as there will be a shift to Goa. The unit is presently staying in a resort in Goa, called Alila Diwa Goa.

A source from the production house says, "We were thinking about doing something different. In order to give our audience something refreshing on the occasion of Valentine's Day, the whole cast of Sajan Re Jhoot Mat Bolo is off to Goa and is spending a jolly good time out there. The episodes will show the chemistry and romance between each and every couple in their own style which varies from person to person."

This particular segment will be aired probably around the Valentine's Day.  In short the episodes will be fun-filled and will have a family picnic like atmosphere.

The whole cast will be coming back to Mumbai by 27th of this month, but Sumeet Raghavan (Apoorva) will be winding up his shoot by 26th and will be back before 27th morning, as he has to shoot for the next episode of Jhalak Dikhhla Jaa.

Shalini Khanna and Melissa Pais confirmed the news of shooting at Goa for Valentine's special episode. "I don't know anything about the track,  but I am enjoying to the fullest as the hotel is outstanding," says Meliisa.

Get ready to witness Valentine's Special episodes in Sajan Re Jhoot Mat Bolo!

+ 4
10 years ago thanks, looking forward to this track. guess mohit sa will be leaving soon then...

+ 2
10 years ago Wow lukng forward to these episodes already