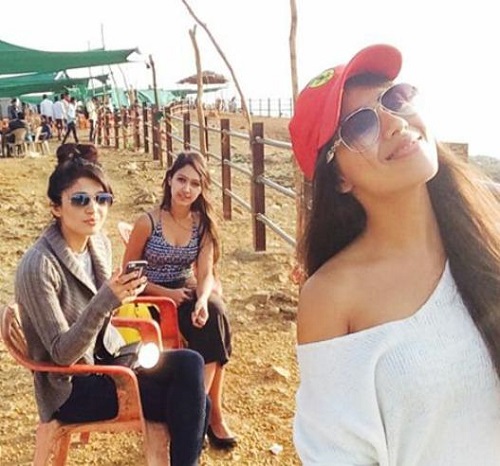 The girl gang of Kaisi Yeh Yaariyan has been shooting back to back with a tight schedule. Long working hours has surely drained the girls of the show which led them for a drive and enjoy their outing. Veebha (Vibha) Anand, Charlie Chauhan and Krissan Barreto drove to Lonavala.

When contacted, Veebha excitedly said, "Yes, the entire girl gang had planned to go to Lonavala. All of us had an off that day from shooting so we planned accordingly. But at the last moment, due to some scenes, Niti Taylor could not join us. We had been there only for a day however, it was surely that much required break. All of us were barely in the room. We were just roaming around outside our resort. We also visited the famous Tiger Point. Since it was only girls' trip, gossips and girls talk had to happen (laughs). We went out for a drive at 2:00 am. It was just crazy. One thing I tried there was wearing a bikini. All of them were girls so I tried wearing but had there been boys I wouldn't for sure. Though wearing a bikini is common but it is about how comfortable are you wearing it. Summing up together, our trip was just fantastic."

They undoubtedly has broken the myth that girls can't be friends!

Manan4ever 6 years ago Niti Taylor ur acting was just mesmerizing in last epsd!!!Luved each and evry moment of MANAN!!!Luv u so much cyndrella!!!!

+ 2
6 years ago Love the girls gang b there bonding.Charlie,krissan,niti Taylor and veebha in kaise yeh yaariyan

6 years ago Niti Taylor, u are doing a fine job as Nandini !! Kudos to ur Professionalism !!

6 years ago I salute your hardwork,dedication and true proffessionalism Niti Taylor..seriously it requires lots of patiencec to put such an effort and being the youngest,you are the one who got least holidays till now..Parth Samthaan and Niti Taylor you guys rocks as Manan in Kaisi Yeh Yaariyan..Veebha Anand,Charlie Chauhaan and Krissan Barreto good job..

6 years ago Niti Taylor Luv u as nandini...Keep Rocking...