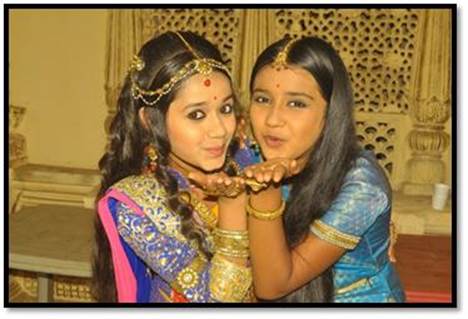 They hit off well as Phool Kanwar and Ajabde (Roshni Walia), respectively, on screen, but even off the screen, they share a great chemistry.

A source from the set says that the two princesses have been close friends since a long time and spend most of their time being together on the sets. They love playing pranks on each other and enjoy laughing and joking as well.

Jannat Zubair Rahmani who plays Phool Kunwar, said: "I was really excited when I got this role as I always wanted to be part of historical shows. When I came to know that Roshni will be sharing the screen space with me, I was extremely glad.

"I have known Roshni since two years and now she is more like a sister to me. We both have a gala time on sets as it's always fun to work with your friends."

Wesley Snipes Refutes Patton Oswalt's Allegations of Being a 'Diva' on ...

Urvashi Rauleta takes to the streets to feed underprivileged girls

Realtalk 6 years ago Love both girls , roshni walia and jannat zubair and our prAja rock ;)

RoSalRules 6 years ago Roshni walia love you so much as ajabdeh.

Sizzling_Sia 6 years ago Roshni Walia and Faisal khan rocks as PrAja . love them to the core .

cutesrushti 6 years ago Roshni Walia , Jannat Zubair Rahmani and Faisal Khan u three are simply awesome...
Love d roles of three of you...

atominis 6 years ago The child actors are talented but it does not look appropriate when kids are shown having romantic feelings or talking of marriage. Agreed child marriage was norm in those days but makers of Maharana Pratap should not extend child romance track much. Instead they should take a leap and show older actors for romance and marriage tracks.
Already child actors have a good image on audience mind. But if they delay in taking a leap then audience might not take to new actors easily as they would be too used to the child actors. They should not repeat mistakes that they made in their other show, Jhansi Ki Rani. Just my POV as a viewer.

PureDrivenSnow 6 years ago Nice to know they're good friends offscreen too.