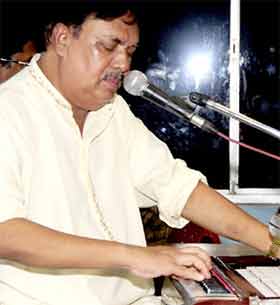 Ghazal singer Najmal Babu, who was not keeping well lately, died here late Tuesday night, a family source said Wednesday. He was 60-plus.

Babu's body has been kept at the town hall in the city and his funeral will be held Wednesday evening.

Babu began his career by singing for orchestra troupes and became popular in Kozhikode and Malappuram districts and soon he started performing across the country, thanks to his popularity.

Some of his hit ghazals are "Tum nahi kam nahi" and "Padanorthoru madhurita ganam".

"He was immensely talented, but he never got the much needed back up to move up in his career. His father Abdul Khader Babu was also a hugely popular singer in Kozhikode," K. Mohan told IANS and informed that way back in 1972 Babu sang at his wedding.

Babu worked in the Middle East for some time, but returned here to continue as a professional singer.

Local CPI-M legislator A. Pradeep Kumar remembered Babu as a popular person in the city.

"Even though he did not go up in his career, he was hugely popular in the ghazal-loving Kozhikode city," Kumar told IANS.

Taapsee Pannu: Will ‘break all ties’ with Anurag Kashyap if ...
31 minutes ago

Bigg Boss 14: Kavita Kaushik shuns reports of being a part ...
50 minutes ago