With the IPL season starting, SRK's TV show "Ghar Ki Baat Hai" on NDTV Imagine produced under the banner of Red Chillies Idiot Box, which started as a tri-weekly show ( Friday to Sunday) is going to be one hour weekly, on Saturdays between 9-10PM from 11th April. 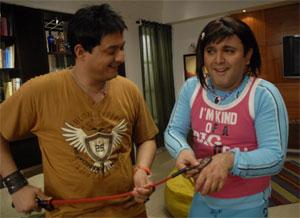 Two new episodes will be telecast back to back. So there will be double masti and dhamaal for viewers. Confirming the change Director Anant Mahadevan says, "I always thought comedy should be weekly. Ghar Ki Baat Hai has found its own mark. The feedback for the show is excellent. So are the reviews by TV critics, who have called it an "absolute scream" and rated it among the best comedies on Indian television."

"People even watch the repeat telecast and we have the best of talent in terms of actors who have amazing comic timing. Once a week airing of two episodes back to back every Saturday is a good idea. In case of a Sitcom like "Ghar Ki Baat Hai" the entire story is told within a stipulated time of 25 minutes, unlike soaps that stretch forever... It is a comedy of manners and words rather than the comedy of slipping on the banana peel," he adds further.

The story revolves around the hilarious situations and events in the lives of the Yagnik family, a young couple, Rajdeep and Radhika Yagnik, living in Mumbai along with Radhika's unemployed brother Kapil Kumar aka Kaku. The constant one up situations between the brother's in-law and the wife playing the bridge between them gives way to a comedy of errors. How these diametrically different people unite as a family, is the essence of 'Ghar ki Baat Hai'.

rojmal1 13 years ago Ghar ki baat hai is really boring. How one can compare with the superb JASSUBEN. NDTV please think again.

good for the team