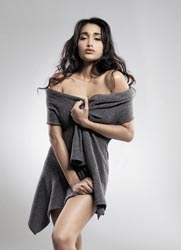 Maxim India is all set to blow some warm air in the chilling winter season. The December edition has a breathtaking photo shoot with Bollywoodï¿½s cute actress Jiah Khan on its cover page. She does her hottest act ever for Maxim.


On this occasion, Anup Kutty, Editor, Maxim India, says "We had been getting too many requests from our readers to get Jiah to do a Maxim shoot. And with Ghajini around the corner, we figured this would be the best Xmas gift we could give to Maxim fans. This shoot will definitely raise a few eyebrows and get Jiah the kind of attention she truly deserves."


Maximï¿½s exclusive photo shoot, where Bollywoodï¿½s hot girl Jiah Khan, decides to show her sexy side to the world by appearing on the cover of the magazine. This super hot photo shoot was shot by an ace photographer R. Burman.


"It was a lot of hard work but a great fun shooting for MAXIM. I am usually portrayed as sexy but actually I consider myself a regular girl. The photographer R.Burman made me very comfortable at the time of the shoot. I feel the photo shoot has helped me search the best out of myselfï¿½, said Jiah Khan.


Apart from the breadth taking photo shoots, the issue also has list of the SEXIEST EVERYTHING OF 2008 which lists out some of the greatest points of this year including phones, laptops, VJs, travel destinations etc.