The item song bug has bit Subhash Ghai too.

The showman has always been known for making larger than life films which relied mainly on the histrionics of his actors, power of his script and high voltage direction that carried the master filmmaker's stamp. However, even he has not been left untouched with the trend (or if we can say the bare minimum requirement) of having an item song in his film. To fulfill this requirement, he has roped in Sambhavna Seth to perform an item song for his experimental film 'Black & White.'

Some may ask Sambhavna Seth who? She is the same girl who sizzled to the beats of 'Aashqiue Ye Meri' two years back in '36 China Town', a Subhash Ghai production directed by Abbas Mustan. Though entire focus of the two versions of the song was on the likes of Upen Patel, Shahid Kapoor, Kareena Kapoor, Akshaye Khanna and Esha Koppikhar (yes, that's the way she is spelt today!), the fact remains that this Himesh Reshammiya composition began and ended with Sambhavna.

With a repeat offer coming her way, Sambhavna is of course aiming higher and now wishes to work with the best of the banners and directors. Happy with the tag of item girl being levied upon her, she has been quoted as saying, "The role should justify the need for exposure and it should also be done aesthetically". Though the statement is as politically correct as it gets and hardly throws a surprise, it is true that this girl who shot to fame with the music video of remixed number 'Aajkal Tere Mere Pyaar Ke Charche' is quite open to wearing skimpy clothes and revealing her assets, though not just for the heck of it.

A Mallika Sherawat admirer, she has never hidden her thoughts. She had earlier stated, "I admire Mallika Sherawat for what she is doing. I think it requires guts to pave your own way in the film industry and she has done that." 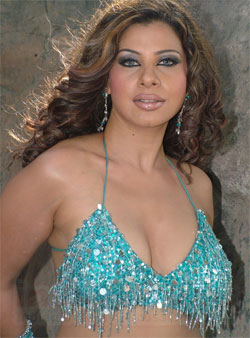 angiani). However, her claim to fame still remains '36 China Town' where she also had a small role to enact.

On her future plans, Sambhavna admits that she is good at dancing and hence wants to teach dance as it's her passion. Moreover, she is definitely looking forward to picking up bigger and better roles in movies though in the mean time she is happy with her item girl image.

Coming to 'Black & White', she recently shot for the item number which should be on air soon. Coming under the banner of Mukta Searchlight Films, 'Black & White' is a film which Ghai shot last year and would be releasing on March 7. As per Ghai, 'Black & White' is an issue-based subject with a different approach. For starters, the film has terrorism as its central theme and marks the debut of newcomer Anurag Sinha in the main lead.

The film's cast is headed by Anil Kapoor and Shefali Shah while one film old Aditi Sharma (Khanna and Iyer) is the other leading lady. It will be three years after the box office debacle of 'Kisna' that a film directed by Subhash Ghai would be hitting the marquee.