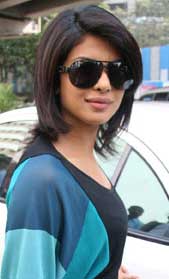 Bollywood diva, Priyanka Chopra has given media another field day, after the achievement of a National Award. This time its due to Gerard Butler.

Priyanka may not have proven her knack to handle steady relationships yet, but it has not stopped many a men from admiring the gorgeous actress. Buzz has it that the famous Butler of king's fame went down on his knees to win favor of the lady at her Yari road residence.

Apparently, hes completely smitten. From taking time off his own hectic schedules to following her rigorous shooting on the sets of Anjaana Anjaani, the Hollywood star has shown impartial keenness in his pursuit!


Gerard had previously declared that he wished for an Indian wife, at which time Priyanka was allegedly involved with co-star of Kaminey, Shahid Kapoor. With that piece of news remaining unaddressed and eventually forgotten, and her relationship with Harman a past, perhaps, this is right time for Piggy Chops to fall in love. With this probable Mr. Right?!

Akshay Kumar Breaks his 18 Year's Rule; Shocks Everyone
47 minutes ago