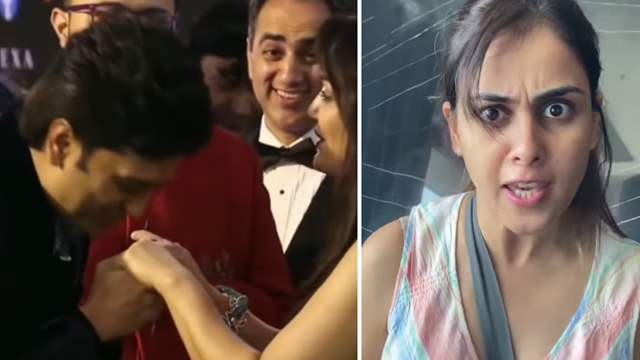 A video of Ritiesh Deshmukh greeting Preity Zinta at an awards function has gone viral on the Internet.

In the video, Ritiesh can be seen exchanging hugs with Preity as they greet each other and then he kisses the actress on her hand. Well, his wife Genelia stood behind looking not so happy and her facial expressions are proof.

While the video has spread all over the Internet, Genelia finally reacted to it and the result is hilarious. She shared the same video with a twist and captioned it, "Wanna know what happened back home?"

The video shared by Genelia begins with the same episode of her husband Riteish kissing Preity Zinta's hands while a jealous Genelia watched from behind. In an added clip, the couple enacted a fun scene which shows an angry Genelia asking her husband, ‘kya kiya, kya kiya, kya kiya?’ to which a  scared Riteish folds his and tells her ‘tera naam liya, tujhe yaad kiya’ with this song playing in the background.

Check out the hilarious video below:

The original video is from the green carpet at IIFA Awards in September, 2019. And the added clip seems to be shot recently as it featured Genelia with a bandage on her hand as she recently suffered an injury.

Riteish Deshmukh and Genelia are one of the most adorable couples of Bollywood and often share cute reel videos on Instagram.