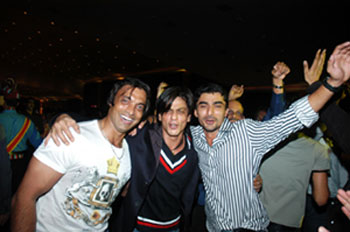 On this New Year’s Eve STAR Plus is all set to entertain and enthrall its audience with a very special evening. For the first time on India television, STAR has brought together the awesome threesome – ‘master blaster’ of cricket – Sachin Tendulkar, Pakistani ‘tufan express’ – Sohaib Akhtar and ‘Bollywood badshah’ – Shah Rukh Khan on CHAK DE YAARA. Further, the show will bring together cricketers of India and Pakistan, who will dance and sing together all through the evening. The starry night will not only showcase Bollywood glamour queens like Kareena Kapoor, Koena Mitra and Diya Mirza but it will be a union of sorts between the two nations. 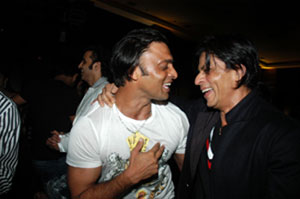 The king of fun & laughter, Sajid Khan along with Vidya Malvade, the captain of India’s women hockey team in ‘Chak De India’ will host the spectacular evening. Both the skippers MS Dhoni and Sohaib Mallik along with their teams comprising of Saurav, Sreesanth, Yuvraj, Gambhir, Shewag, Irfan and others will perform a unique Bollywood act on stage. Sreesanth will challenge SRK with his impeccable moves, Bhajji will be forced to mimic Shahrukh and even propose Dia Mirza. The ‘King Khan’ will make Yuvi repeat hit dialogues of ‘Devdas’ in Punjabi while Dhoni will perform the ‘Don’ number with SRK.  The star studded show will set the temperatures rising in the cold winter evening as Bollywood’s sizzling sirens Kareena, Dia and Koena shake a leg with Shahrukh Khan on numerous foot-tapping numbers. In addition to that, there will be sweltering performances by the popular choreographers Ganesh Hegde and Neeti Mohan.

This New Year’s Eve, will turn out to be one of the most cherished moments of the year with CHAK DE YAARA, which is not only an effort to entertain the viewers but it is an initiative to bring the two nations together on a platform where fun, laughter & love prevails.

masin 12 years ago how can u watch it if u dont have star plus in canada??
i'm dying to see it.....anyone know how??? and plss tell me someone's gonna try and upload it on the star plus section!!!! :(

SuhanaSafar 12 years ago omg sounds amazing! my irfan will be performing!!!! now i really wish i had star tv. :(

kubare 12 years ago Now this is one show....I truly donot want to miss....saw...the clippings on Star News..when this party was hosted...during the Pak vs Ind series...

SapSur 12 years ago i'am seriously very damn eager to watch it..i just can't wait..i'am sure i will love it..because Shahrukh is my favorite actor & Cricket is my favorite sport.. so it indeed will be great..