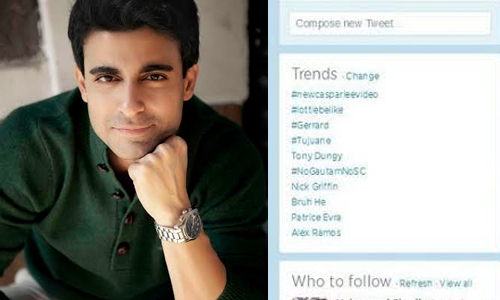 Actor Gautam Rode's track is Saraswatichandra is about to end and we hear that this news has caused quite an up heal amongst fans.

The actor's fans started a petition on twitter with a hash tag of #NoGautamNoSC on Twitter which ended up trending in India as well as Pakistan. Gautam has gone on record saying that he is not quitting the show and we hear that the channel and creative have decided to end his track as he has been offered another show on the same network.

With so much love from his fans, no wonder Gautam's become a favorite for the network as well!

FaultInMyStars 6 years ago My family watches SC and they all love Saras...and Gautam..this is a stupid move!

ipkviewer 6 years ago Gautam, loved your performance as Saras. Hope the happenings are all going in a win-win situation and that you have a nice next opportunity more exciting.

Jananivjc 6 years ago Gautam will Stay As Saras Forever!!
#NoGautamNoSC

twila 6 years ago How can there be Saraswatichandra without Gautam Rode who epitomises Saraswatichandra for millions of his fans ? Gautam is Saras forever ...We want a Happy Ending with Saras and Kumud living Happily ever after !!

tradeoff 6 years ago No Saras No Saraswatichandra. Gautam Rode is the soul of the show.

Ayushii_Angel 6 years ago We want gautam in Sc..No gautam no sc..
Plz dnt do injustice wd us SP..
Love u loads gautam..Impateintly waiting for MK cause cant spend a day wdout watching u ..

MrDarcyfan 6 years ago Love you Gauty. You rocked as Saras. I can't imagine watching this show without you in it. Watched every episode of Saraswatichandra. Mostly for you. You made Saras real to me and for that I thank you! :) All the best for your future, and always know, your admirers will continue to support you!