What not journalists do to sniff out a story!! Take this well known scribe's example; when he heard that Gaurav Chopra and Mouni Roy were supposedly living in at a residential complex, he reached there with a computer print-out of both Chopra and Roy pictures. 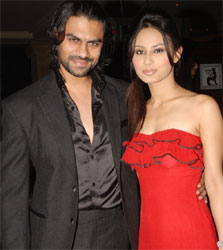 Featured Video
He diligently started asking each and every security guard of the sprawling complex, whether this couple was living there. Since the print outs were not clear, the guards were making the poor khabru run from pillar to post. Finally even Gaurav saw him once.

When we spoke to Gaurav about the incident, he refused to comment. On the pertinent question about him and Mouni, Gaurav said, "I will not comment on anything. Use your imagination. I am tired of giving explanations and now in a way, I enjoy this mystery which surrounds our equation.I get a kick when people speculate about Mouni and my relationship". But now both of you are seen in public together?  "Well that happened with a certain other lady as well right, so that does not explain anything", he says.

Right now Gaurav is busy going through a film script. "We might start shooting by the middle of the year", he adds. Before this he has done a couple of international films. In the interim, he is taking time off. "I will soon shift to my new apartment, it has been ready for the past year and a half, but as I was quite busy with fiction shows and reality, I could not complete the interiors. I hope to do the same very soon and move in", quips the actor.

As Gaurav' birthday falls on the 4th April, he plans to go to Egypt to celebrate it. "I did not want to go to places where all go. The Pyramids are the most beautiful place on earth", says he. On his return, he plans to throw a Hawaiian style party to celebrate with family and friends.  "Normally I am not a party person but I have decided to be a bit different this year around", states Gaurav.

He was earlier linked with Narayani Shastri..

+ 6
13 years ago Gaurav and Narayani were awesome together...they looked very good because it looked like they were around the same age...and i just they looked perfect with one another!

Mouni i think looks too young with gaurav and it just looks weird.

+ 5
13 years ago Hmmmm... i liked Gaurav in Lrl... thought Rajeev is unbeatable when it comes to looks and acting.. he did a good job! N this whole relationhsip thing, well let the guy live in peace, it''s his personal life! He looks ok for Mouni, but better with Narayini x

RocketScientist 13 years ago Certain other lady? Narayani and he made a better couple. I hope she find a better man than him soon.

i really loved his and Narayni Jodi, they complented each other ...

+ 2
13 years ago Hmmmm... he look good with both lol mwahhh liked him in aisa desh hai mera with saumya tehy maked a great couple lol but i am sure he and mouni is together tehy just make this for publicity! lol some people can do anything to get atention mwahh

13 years ago But i liked Gaurav and Narayani together more than him and Mouni!

+ 3
13 years ago omg gaurav
chupa rustam ;)
u look gud wid mouni yaar even narayani let me tell u one thing u look gud wid everyone ;)