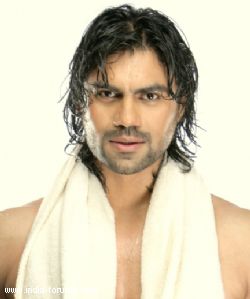 The handsome hunk Gaurav Chopra who was last seen essaying a cameo role in SAB TV's Lapataganj will now be seen in the #1 show on COLORS, Uttaran.

We all know that Veer (Nandish Sandhu) has gotten to know the real face of Tapasya (Rashmi Desai), and has sent her out of the house. With Tapasya becoming homeless, there comes Gaurav Chopra as a new guy in her life!!

According to our source, "The new man to enter Tapasya's life is a multi-milionaire, played by Gaurav Chopra. He plays the role of Raghuvendra Pratap Rathod, who is a ruthless business man. Tapasya will bump into this man accidentally, and they will have a track together".

Gaurav will be entering the show in Monday's episode.

We tried calling Gaurav, but he remained unavailable.

KANHA6 10 years ago How can Uttaran become no.1 show on Colors ? Who has rated this ? I haven't found Uttaran rated as no.1 anywhere.

Uttaran is actually the WORST show on Colors !! It is absurd, unrealistic, boring & extremely nagging one.

DV_LVR 10 years ago borrringggggggggggggggggg...... i guess the CV hates Veer coz he only keeps suffering in this show

nazmobile 10 years ago Tappu is the one villian that you just want to love rather than hate...she's brilliant

guljee99 10 years ago tapasya u rock ... u look so adorable n ur acting... i wonder how u cry ur voice is the same at every level of ur crying... plz leave veer n icksha n run away wid the new guy... but this show rocks only bcoz of u....love ya...

cassie 10 years ago i agree wid u @superstar95...seriously couldnt they find sumone better thn him...
ewww...well i think tapasya will probably use him and his wealth to get bck at veer..

superstar95 10 years ago didnt u guys get a better guy???? hezzz disgustin i h8 him ewwwwwwwwwwwwwwwwwwwwwww!!!! IT WAS GOIN SOOO GUDD NOW IM JUST NOT GONNA WATCH IT CUZZZ OF THIS STUPID GUY!!

Mages 10 years ago how many mens does tapasya needs in her life....

first sid...veer now this raghu...after raghu another and the list goes on.....

this women is disgusting....she is out of her house and look she roped a multi millionaire....

Akshay Kumar, Kangana Ranaut, Richa Chadha and many more ...
a minute ago