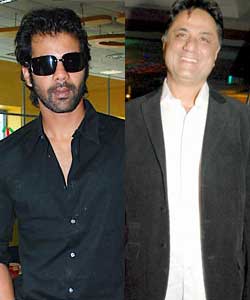 Harry Baweja and Shabir Ahluwalia's Flying Turtles, which produced Ganga Kii Dheej on Sahara One is all set for their next project on Star Network (either on Star Plus or Star One).

According to our source, "The production house is making a love triangle for Star Network. The show is not yet titled; it is the story about a Royal family where a prince has some sort of mystery in his life and how he get married forms the major crux of the story line".

We contacted Producer Sakket Sawhney of Flying Turtles, but he was unavailable for comment.

We hear that the audition for the show is going on in many parts of India, and the production house is looking for fresh faces..

The makers of Ganga Kii Dheej are now working on a show for Star Network...

saaniya2 9 years ago story of Prince!!! wow!! my gangs choice to see Gavie Chahal aka Rajbir of Mohe Rang De as prince , guys plz cast him . all the best flying turtles

9 years ago Shabbir,that's fine as long as you don't turn up duplicating the role of Mishal Raheja as Dutta in LTL..its not going to work mate ..stay clear of LTL its a doomed show.

+ 2
9 years ago Mohit Raina, Leena Jumani THE PERFECT couple for this show. OMG! Mohit as the mysterious prince...perfect!

+ 4
9 years ago shabbir i love your acting so much in kayamath. Gurmeet is really talented guy and would love if he is in that show

9 years ago Happy to hear this. Keep rocking team. All the very best and we expect the best of best from you.