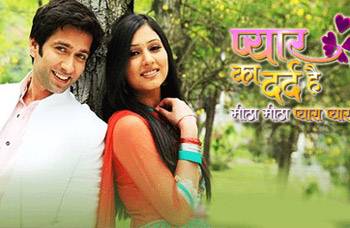 Rajshri Productions' popular show Pyaar Ka Dard Hai...Meetha Meetha Pyaara Pyaara... on Star Plus to bring forth some exciting drama in their forthcoming episodes where Galib will try to reveal Ayesha's truth in front of the family.

According to the ongoing track of the show, we have seen how Galib wants to reveal Ayesha's identity in front of all. Further, Galib will make an attempt to bring the truth of Ayesha (Disha Parmar) in front of the family.

Our source says, "Galib will come along with Ayesha's school teacher to the Deewan Mansion with a motive to reveal Ayesha's truth in front of the family. He will show Ayesha's school leaving certificate to Adi (Nakuul Mehta) to which Adi doesn't trust him. Later, Harish will get hurt when Galib will try to harm Adi. Eventually, police comes there and arrest Galib."

What will be Galib's next course of action? The upcoming tracks of the show will unfold the answers to this question.

6 years ago Thanks for the article!! Hopefully Ayesha will be Pankhuri and we will get our PaYa back forever!!!! #PaYaReunion

6 years ago Thanks for the article :)
I hope Ayesha is Pankhuri :(

6 years ago Waiting for Pankhudi to come back and our PAYA reunion.
Love you Adi/Pankhu