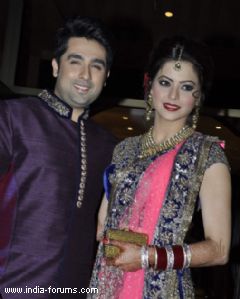 Actors like Abhay Deol and Richa Chadda were in attendance at the wedding reception of actress Aamna Shariff, who has married film producer-distributor Amit Kapoor.

The couple tied the knot here on December 27.

A glitzy reception was held for the duo at Taj Land's End in Bandra here Saturday. Aamna wore a creation by Manish Malhotra for the occasion.

Aamna has been a popular name in the TV industry, having starred as the protagonist in hit show 'Kahiin Toh Hoga'. She made her Bollywood debut with 'Aloo Chat' and then returned to TV with 'Hongey Judaa Na Hum'.

She was engaged to Amit, son of film producer Shabnam Kapoor and Lalit Kapoor, earlier this year. Amit was earlier married to his college sweetheart Sujata, who was not from showbiz.

simran1285 6 years ago Wow didn't even know she was engaged. Wish her all the best.

TheGladiator 6 years ago I'm sooo jealous, but congrats Aamna, may you have a happy married life, god bless you always with loads of happiness, joy & success!!

Amit you are the luckiest guy on earth!!

binimoti 6 years ago Congratulation AamnaShariff, have a happy married life

nsheena 6 years ago Congratulations :-)
she looks lovely, as always!
but why is her make up so white?