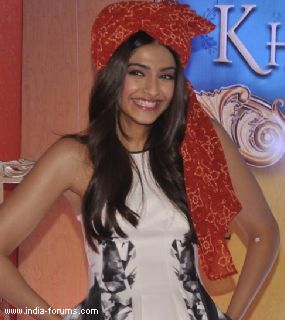 Actress Sonam Kapoor, who has stepped into Rekha's shoes for the "Khubsoorat" remake, says she is not even a patch on the senior actress who is still remembered for effortlessly playing the chirpy and carefree girl in the original.

In the remake, Sonam will be seen romancing Pakistani heartthrob Fawad Afzal Khan when it releases Sep 19.

"I don't think I can do justice to anything Rekha has done," said Sonam and added that for her it was more important to be part of a film that has some meaning and message.

"These days very few films means something, have great values and at the same time they are lots of fun. Hrishikesh Mukherjee was one of the last few directors who made films like 'Guddi', 'Mili' and 'Khubsoorat' that actually had the vibes which appealed to everybody, had a message and was happy and fun film."

"Those kind of films Rajkumar Hirani is making these days and 'Khoobsurat' is one of the other one, which I am part of," said the 29-year-old.

Good cinema doesn't have to be dark or depressing.

"I don't think good film is something that is dark or dying one, I think it can be light also. We are going through too much in India and cinema has always been my happy space and this is my ode to Hrishikesh Mukherjee," said the actress.

Have you shown the trailer to Rekha?

"Rekha is very close to my family. She had even seen 'Aisha' and we had kept a separate trailer launch for her. For this film too, we are going to show her the trailer.