View Profile
For now Rajkumar Santoshi is on another trip and finally started his new project “Ajab Prem Ki Ghazab Kahani” with Ranbir Kapoor and Katrina Kaif. This movie is Santoshi’s first love story and is not too intense kind 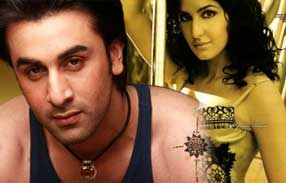 Featured Video
s, but has a lot of humour  in it. He also working for the first time with Ranbir Kapoor and Katrina Kaif and also stars Upen Patel, in a pivotal role.


Ranbir plays a lover boy character called ‘Prem’, immensely in love with Katrina. The movie is being shot primarily in Italy, Mumbai and Goa. Currently the shooting is on full swing on, in Ooty and everyone on the sets is raving about the sizzling chemistry between Ranbir Kapoor and Katrina Kaif.  The shooting of the movie began on 18th July 2008 and sources reveal that the movie is almost 50% done till date.


During the interview post the Release of Saawariya, Ranbir Kapoor in tete-a-tete with Karan Johar, stated that he finds Katrina Kaif the Hottest bollywood Actress.  this actress have got an opportunity to work with someone of her age!


We have seen Katrina performing well with actors elder to her. Now let’s wait and watch how well this hot beauty performs with Ranbir Kapoor, heartthrob.