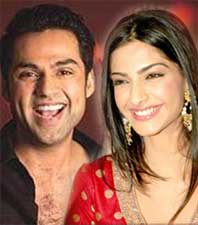 On the sets of Anil Kapoor's much awaited flick, Aisha, a huge and concerning incident occurred!

Currently, the cast and crew of Aisha are shooting in Mumbai's film city where a unexpected fire broke out. The cause of the abrupt fire was none other than a electric short-circuit in the system. According to recent updates, no one from the team was seriously hurt but some just get minor bruises. More so, the team of Aisha has been working really hard for the movie.

Aisha stars Abhay Deol and Sonam Kapoor in the lead. The motion picture is said to inspired by Jane Austan's Emma. Aisha takes the auidence back to the 19th century English countryside atmosphere to the heart of Delhi.

BollyCurry wishes all the best to the cast and crew of Aisha and prays for everyones well being!

Abhishek Bachchan’s note for ‘baby brother’ Sikandar Kher on his ...

Breaking
Breaking Kamya Punjab To Be Seen in 'Bigg Buzz'

Kajal Aggarwal’s fan gets her name tattooed on actor’s Wedding ...

Source Reveals How Radhika Broke Set Norms of Hollywood: "An ...