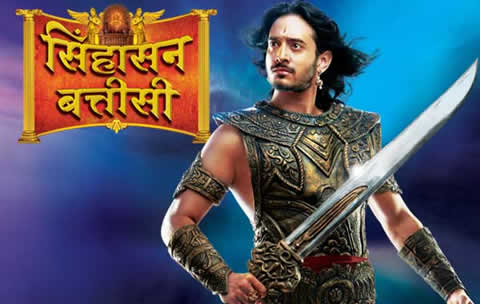 Remember the once popular TV series "Vikram Aur Betaal"? The character of Betaal will now be presented in a fresh way in ongoing periodic drama Singhasan Battisi.

The makers of the show, which airs on channel Pal, hope to tell inspiring tales imparting life lessons to kids by bringing the new character.

"We will be using that plot (of 'Vikram Aur Betaal'), but the screenplay and the characterization will be different. They (makers of the past show) portrayed the roles in a different manner and we will try to show them in other circumstances," Dheeraj Kumar, producer of Singhasan Battisi, told over phone from Mumbai.

There's a Vikram in the show too -- King Vikramaditya -- the lead character, who will be seen talking with Betaal, in order to fulfill a vow.

"We have taken the character of Betaal only as our story already has Vikram. It will be interesting to watch the change in the storyline," Dheeraj added.

Actors Arhaan Bhel and Abhaas Mehta are in talks for portraying the role of Betaal, but a formal announcement is yet to be made.

9 years ago everything in this world has its share of criticisers! We just have to accept it and move on! But one thing: this is one of the songs I enjoyed truly and I am happy with the amount of success it has got! Good going Dhanush!

+ 3
9 years ago Hey thanks for updating. It's a catchy tune so, I like it. Congratz Dhanush & Anirudh and the team! Keep it up!!

+ 4
9 years ago I wont say this is the best song I have ever heard but its really catchy and sometimes ppl are attracted to just the simplicity and innocence of the lyrics. The song is about heartbreak and that is a universal language. Javed is just a snooty bitch who doesnt understand the beauty of simplicity. One doesnt have to blast creative Urdu words in the lyrics for a song to be considered epic. He's just jealous. Must be going through menopause or something

9 years ago this song is stuck in my head from all day!!! its nice

9 years ago Javed ji...enough of your snobbery!!!!Do you mean to say that the 20 million viewers are dumb?you are insulting our sensibilities now!!!

9 years ago Javed Akhtar is not at all graceful and this is called intellectual arrogance.Does he not know that simple lyrics touch millions of hearts and we don't need high funda lyrics for heartfelt and soulful singing.Javed can go take a ride.

9 years ago Javed Akhtar acts like he is the smartest man in the world and the only one that can write lyrics. Yeah, he may have written some good stuff but he's also written some major crap. He can't write English lyrics to save his life. e.g. Dude don't mess with me from Goal. Go retire Akhtar and don't criticize others for no reason.

9 years ago love this song...today happened to see dhanush in rain tree along with superstar:)memorable day:)

+ 7
9 years ago No matter what Dhanush says! Only tamil people will enjoy this song 100%, bcus "Kolvari Di" can't be translated to english, even many asked about it!