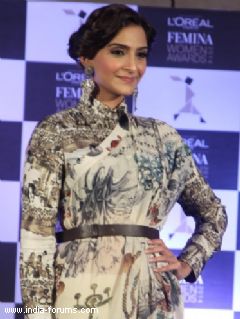 Sonam Kapoor attended the inaugural session of the 15th FICCI Frames 2014. She lit the inaugural lamp along with other dignitaries, including filmmaker Ramesh Sippy and Star India CEO Uday Shankar.

The actress looked chic in a designer outfit.

The conference opened with the delegates discussing about the growth in the media and entertainment industry in 2013.

"The media industry is unique and despite the slowdown last year, the media and entertainment industry experienced a growth of four percent over last year and this is a testament to the tenacity of the industry," Shankar said here.

FICCI Frames, an annual conference where reforms, regulatory mechanisms and implementation of policies related to the media and entertainment world are discussed, started on Wednesday. It will end on Friday.