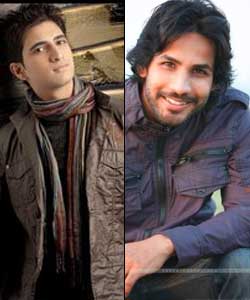 Tellybuzz earlier reported about Shreya Creations coming up with a new show for Imagine for which the story is based on the life of a young girl from North India.

Kritika Sharma is now confirmed to essay the protagonist in the show as the production house wanted a very young looking girl to essay the role.

And now we come up with few more names that will essay meaty roles in the show.

A source says, "Nivin Ramani who is seen in Star Plus' Maryada as Cheenu has been finalized to essay the lead opposite Kritika Sharma in the show."

"Krip Suri, who was last seen in Zee TV's Apno Ke Liye Geeta Ka Dharmyudh, will essay a hard-core negative role in the show. He will essay Bhairov Singh who is dominating by his nature and has no mercy on others," adds source.

We contacted Krip Suri and he says, "Yes, Talks are on but nothing has been finalized as of now as I am shooting for the last few episodes of Geeta."

We contacted Nivin and he says, " You have heard it right, but still a final meeting is pending, so I will be able to give you the confirmation only after that."

The shoot for the show will start once the cast gets locked.

+ 3
9 years ago Although I find this serial interesting, I would not trust it to last very long because Imagine is known for axeing its shows even if they are doing well.

+ 2
9 years ago Imagine has totally lost it one more time by ending KMH again :) Hope it becomes same and takes back its decision, else nothing is going to work for the channel. we r dead sure :)

mansigawde1210 9 years ago Go jump in to a well, Imagine TV officials! Unfortunately, you all do not possess enough brains to realize that you are indirectly reducing your TRP's by ending KMH which is THE ONLY SERIAL...I repeat THE ONLY SERIAL WORTH WATCHING ON YOUR HOPELESS CHANNEL

9 years ago Agree with u kitto 125.. NDtv imagine channel should be shut up if they end KMH2 in this way...If they do this to KMh2 then I'll try my best to shut up the channel for sure ... No use of imagine TV without KMH & karanika...

Binusikha 9 years ago most ppl watch ndtv imagine bcoz of kmh so if ends i'm sure nobody will it.if kmh would be given on another channel like starplus or starone den it would surely d bst show ever indian channel bt badluck is dat it is given in imagine which give no more importance to dat show..

+ 3
9 years ago If imagine tv cant handle shows then why waste energy on advertising and making them! Die in hell imagine tv! Starplus and imagine tv are those two loser channels who have no brains! Hate you starplus for ending tere liye. And hate you imagine for thinking to end KMH or GKD

9 years ago wats the use of launching a new show coz anyways after running for 3 months or so either it will be shifted to some ridiculous time slot or be replaced by some senseless reality show. If i were a show producer i would rathar vouch to telecast my shows in channels that are not so fickle minded. Glad to hear abt the show but would hope it runs on some other channel coz the fact is and will always remain that imagine is least bothered about shows. Rathar i feel imagine should showcase reality shows 24*7 in their channels, that way aleast good shows wont be sacrificed every 3 months.

ashokram 9 years ago ITS A GREAT NEWS THAT NDTV IMAGINE IS COMING UP WITH A RELEVANT SHOW THAT TOO WITH NIVIN RAMANI IN LEAD .CONGRATULATIONS TO WHOLE TEAM OF SHREYA PRODUCTION.WE ARE SURE TALENTED ,SMART NIVIN RAMANI WHO HAS DONE A GREAT JOB IN MARAYDA , GETS TO SHOW HIS FULL POTENTIAL IN LEAD.ALL THE BEST TO NDTV IMAGINE AND SHREYA CREATION