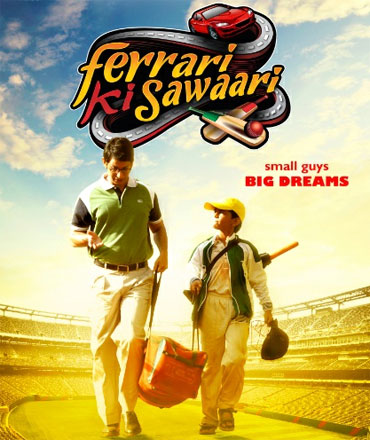 After breaking all opening box office records with his movie "3 Idiots", filmmaker Vidhu Vinod Chopra's next offering "Ferrari Ki Sawaari" is ready to hit theatres Friday. Also releasing with it are projects like "Chakradhaar" and "Qasam Se Qasam Se".

It narrates the tale of a little boy who thinks of nothing but cricket -- and his father thinks about nothing but his son.

To fulfill his son's dream of playing at Lord's cricket ground, the honest and upright Rusy (Sharman) performs the first small act of dishonesty in his life. He borrows a gleaming red Ferrari for an hour. The only trouble is that he doesn't inform its legendary owner.

Their Ferrari ride leads through a chaotic world of street-thugs and mass-weddings. Meanwhile, another saga unfolds - a grumpy old man and his secret wounds, and an epic rivalry that goes back 50 years.

The major highlights of the film are its shooting at Lord's Cricket Ground in London, actress Vidya Balan's item number "Mala jao dya na ghari" and the red Ferrari, which is owned by cricket star Sachin Tendulkar in reality.

Made at a budget of about Rs.20 crore, the film has been shot on location, on busy roads and amidst live audience.

Other films releasing alongside "Ferrari Ki..." are "Chakradhaar" and "Qasam Se Qasam Se".

Produced by Bharat Anand and directed by Shakur Sir and Dharamprakash, the story of "Chakradhaar" revolves around the character of a simple righteous boy of Benaras, Shravan, and his transition to a local powerful goon, Pandit.

The movie launches debutant Abhishek Anand in the lead role as Shravan and Pandit.

Extreme Martial Arts (XMA) has been extensively used in the scenes of the film, which also features Faith Wladyka, Rakhi Sawant and actor Satish Kaushik.

Rakhi also has an item song in the film.

With last week's release "Shanghai" getting a mixed response at the box office, and "Rowdy Rathore" continuing its successful run, it will be interesting to see if these movies will bring something fresh.

Sparks fly as Rakhi and Nikki meet head-to-head in an epic clash in ...